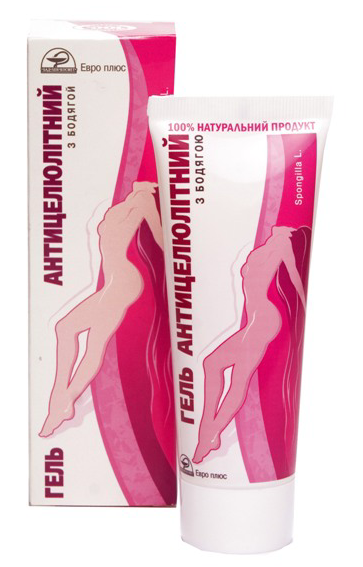 Anti-cellulite gel with spongilla lifts your skin and makes it smooth in the problematic areas of your body which are inclined to the cellulite appearance. Effect of the Gel is directed to activate skin respiration, to intensify penetration of the oxygen in it, to accelerate metabolism on the problematic areas and burning of the subcutaneous fat. After gel application your skin becomes more elastic and lifted, skin’s texture and colour become even, the cellulite becomes less visible. All these happen because of the effect of the gel components which are well-known for a long time as those that can fight with the cellulite.
Spongilla lacustris  is the representative of the Spongia type and belongs to the sponge silicon group (Cornacuspongia, Spongillidae Family).Traditionally it was used as a ground Spongia powder, silica which has needles which penetrate in the upper layer of epidermis  causing local irritation of the cutaneous covering, hypodermic capillary and blood vessels expansion, which occur deeper. It facilitates the activization of the superficial blood supply, relieving of local pain, it provides dispersion on the affected areas. While using spongilla biologically active substances (such as autakoids, kenins, histamines, prostaglandins) are locally released. These substances facilitate healing of the injured tissues, scars and indurations resorption, they also renew local immunity and protective skin functions.
Buckeye extract  increases resistance of capillary walls and red blood cells, venous vessel tone, increases blood flow in the veins. It contains catechins, flavonoids (rutin, quercetin, pectines and tannins) and other organic compounds.  Extract action is connected with the presence of the flavonol glycoside esculin and saponin escin in it. Esculin reduces capillary permeability, stimulates antithrombotic activity of blood serum, increases antithrombin production in the vessel system, intensifies vein blood filling, especially if there are pathological changes in the veins. Escin is triterpenic glycoside which has evident capillary protective activity and has anti-inflammatory action. Escin lowers blood viscosity. These properties are used for acceleration of tissue function recovery (edema reduction, relief of pain) after injuries (separately – sport injuries), operations, in cases of phlebitis, varicose veins dilatation and in cases of some other pathological states.
Laminaria extract  which is included in the gel composition, refreshes and tones up the skin and improves cell respiration. It facilitates the penetration of natural bioactive components and vitamins in deep layers of the skin. Active natural components of the laminaria make drainage actions, improve blood microcirculation. Biogenetic iodine which is included in laminaria and a lot of vitamins normalize the metabolism on the cell level directly in the skin and hypodermic fat cells.
Orange oil  cleans the skin, makes pigmented spots less vivid, promotes cell renewal, improves skin color. Because of the stimulation of the bloodstream the orange oil is a good tonic remedy. In addition, oil raises skin elasticity, stimulates and restores it which has effective action in case of the cellulite appearance.
Juniper oil  has high antimicrobial activity, strong bactericidal action. The main property of this oil is increasing of blood circulation in all layers of cutaneous covering as well as the property to eliminate toxins and free radicals from the skin. It promotes the skin cells regeneration and eliminates cellulite. It raises skin elasticity, eliminates loose skin, its uneven color and tiredness.
Gel properties:
- raising of the  smoothness and elasticity of the skin;
- elimination of the cellulite on the problematic areas of the body;
- elimination of inaesthetic  fat sediments;
- strengthening of the blood microcirculation;
- improvement of the metabolism in tissues.
This anti-cell  ulite body gel is made as an aid for improvement of the figure contours and cellulite elimination. Gel has effective action even in cases of the noticeable stages of the cellulite. The skin lifts up, its tone and elasticity raise.

How to use: spread the gel on the problematic areas of the skin with the massage moves.  Let it absorb avoiding clothes contact. Wash off the rest of the gel with warm water after 20-30 minutes. Also after applying the gel thoroughly wash your hands.
Caution: spongilla action is based on the mechanical skin irritation which is determined by silicic needles content, which penetrate in the upper layer of epidermis causing local irritation of the hypodermic capillaries, which is followed by weak warming effect and temporary skin reddening. It proves the effective prophylactic action of the gel.
Contraindication: individual sensitivity to the components.
Stop application and consult your doctor with the appearance of hypersensitivity reaction.
Recommendations on storage: store in a dry, dark place at a temperature of +5 to +20 ° C.
Period of validity - 24 months from date of manufacturing.